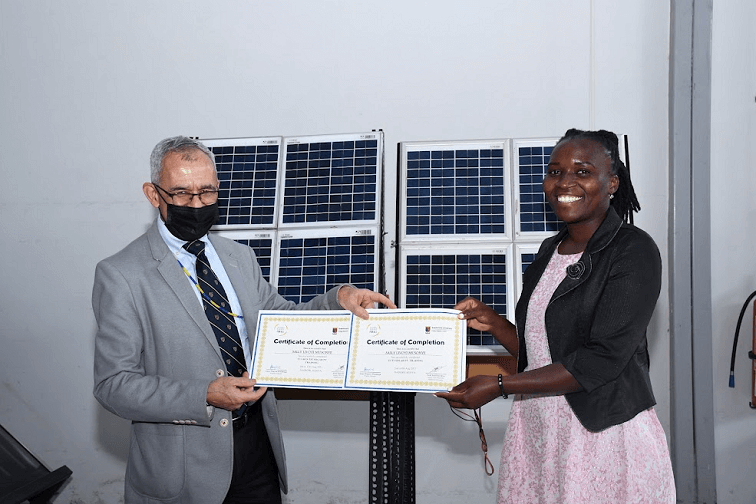 In 2016, Sally had just completed a graduate program with Mabati Rollings and had moved to the areas sales department, when she spotted a job advert with the then KPLC now Kenya Power. When she saw the advert, she was away in Kabarnet selling iron sheets and she requested her mother to make a written application and drop it at Stima Plaza on her behalf. She passed the interview and relocated to Kitui county where she currently works as a design and construction engineer.

Having been born and raised in the city, Sally did not want to move to Kitui but as she reflects six years down the line, she reckons it was a blessing in disguise. When she arrived in Kitui, it was a small county and devolution was still finding its roots. Prison Break, a series she had long forgotten, was currently the hit. She quickly became comfortable leading a team and was managing a large financial budget. Her co-workers addressed her as “Madam Boss”, “Engineer” and like anyone, she enjoyed her newfound status.

Two years later, upon returning to Nairobi for training, she met her age mates who were several steps ahead. They had completed their Master’s degree or bagged a few professional development courses, or both. It was then that she opened her eyes and realized the importance of proactively engaging in professional and personal development and that her county titles were but a fallacy.

She quickly renewed her membership with IEEE, the world’s largest technical professional organization for the advancement of technology which had lapsed after her graduation. She then began volunteering regularly. Whenever she found an opportunity, she would hop on public transport at 5 am and be in Nairobi by 8 am to attend a workshop, a networking dinner, or organize an expo. She fondly remembers a week when she came to a university in Nairobi, to set up a two-day workshop for future engineers to assist their transition to the workplace with ease.

Sally then rekindled her passion for renewable energy and when she spotted the Women at the Forefront training program funded by Sustainable Energy for All, she jumped at the opportunity. During her leave from work, she took the opportunity to attend the training which she in her own words says, “surpassed her expectations.” Previously, she was not able to attend the training as it was in person. However, since 2020 Strathmore Energy Research Centre (SERC) has been offering the courses online which gave her an opportunity to participate. Further, the subsidized rate was good for her pocket as an in-person training also included costs for accommodation for the duration of the training.

Secondly, when she registered for the online classes, Sally expected to receive notes and read on her own, but to her surprise, the trainers walked with them step by step through technical designing, planning, and cost calculations for large PV and hybrid systems. The trainer also availed sample questions and where there were inaccuracies in their calculations, they were guided. Further, she had expected a plug-and-play system with a battery and a solar panel, but that was not the case. She got an opportunity to learn about various inverters and grid-tie systems that will assist her with handling future projects in the county. She also came for an in-person practical training where she was able to put the theory into practice and meet other women in her field.

What’s next for Sally?

This training will assist her achieve one of her dreams, to become a T3 licensed solar technician by the end of 2021. Sally is also exploring how to become a registered engineer. She believes that the training she received at SERC also builds up to the current model being adopted by Kenya Power on ensuring universal access through the Kenya Off-Grid Solar Access Project (KOSAP). Electricity is expensive and not all in Kitui will afford electricity, but renewable energy will allow them access to energy.

She also just completed the grid design for the Kitui hospital which was upgraded to level five. During the training, several questions crossed her mind on how she could include an interlink between the on-grid and off-grid.

Being at the county also allows Sally to have a lot of free time in the evenings and the weekend and it is during this time that she hopes to explore areas that Kenya Power can tap into renewable energy in the county.

To the aspiring engineers at Strathmore University

When I was in University, I did not have as many opportunities as I see here. At Strathmore, budding engineers have exposure, tutors, curriculum, and a well-equipped lab. They also have access to the Energy Research Center which allows them to be forward-looking and align themselves to the 17 Sustainable Development Goals. They should therefore not limit themselves to classwork, the hostel, or home. Instead, tag along with the faculty and be part of their projects. Explore the Energy Research Centre which is a stone’s throw away from the engineering lab. This will ensure you can link your class experience to the industry experience and trust me, you will be a million steps ahead of many.

Sally Musonye leaves me inspired and as she walks away, she says two very eye-opening statements. If you get an opportunity to work in the county, do not go and compete with the locals and open the next butchery or salon. Rather, guide the locals on how they can tap into professionalizing their area. Do not compete with them, rather become a compliment. Also, next time you take leave, don’t spend it sleeping. Read and develop yourself.

This project is funded by Sustainable Energy for All and is led by Ms. Anne Wacera Wambugu.

The article was written by Ms. Anne Njeri, Communications Officer at Strathmore Energy Research Centre. You can contact us at serc@strathmore.edu for further information.