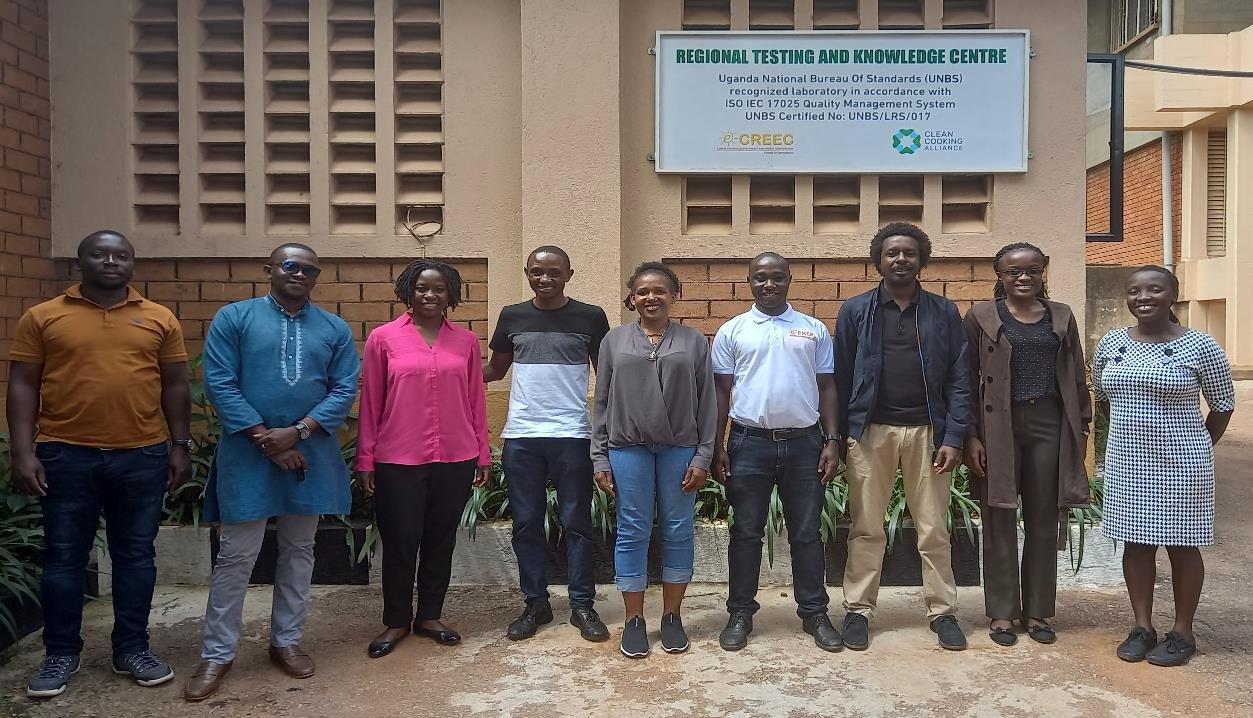 Clean cooking is fast becoming an environmental priority and an area of interest globally with investors and governments willing to channel both intellectual and financial resources to the sector. It is through this that clean cooking has glaringly progressed as stakeholders heavily invest in research and the establishment of testing labs to set the seal on the consummation of clean cooking methods and appliances. The technical performance of cookstoves is the core aspect of perceiving their quality and aptness in realizing the United Nation’s Sustainable Development Goal 7 (SDG); affordable and clean energy. Strathmore Energy Research Centre (SERC) is determined to ensure its contribution to clean cooking is applaudable and has therefore set out to establish a stove testing lab that will guarantee the Centre’s universal recognition in stove testing and widen research in the clean cooking sector.

On 11th May, a team of three from SERC travelled to Kampala, Uganda for this sole purpose. The two-day benchmarking visit was to the Centre for Research in Energy and Energy Conservation (CREEC), a Regional Testing and Knowledge Centre (RTKC) in Makerere University. CREEC is a renowned research centre founded by Dr. Izael Pereira da Silva in 2001.The centre has an ISO recognized laboratory accredited to carry out tests on cook stoves. It was thus the best place to carry out a benchmark that would facilitate SERC to set up a similar lab for stove testing. Walking into the university, the relaxed ambience clearly indicated that one was no longer in the bustling streets of Kampala and that the academic power house was naturally one of the pre-eminent places to excel. Makerere University was all that we had envisaged and more, the realization of really being there evoked a feeling of immense ingenuity and that immediately gave us the conviction that we were indeed in the right place.

Our first day of the visit started with a short walk to the College of Engineering, Design, Art and Technology (CEDAT) where CREEC is based. We were cordially welcomed by Ms. Agnes Naluwagga, the RTKC coordinator who introduced us to her team and showed us around the centre. We had our first meeting with members of CREEC who shared what they work on as a research centre. We also made a presentation on what SERC was about and realized that our goals and interests greatly aligned and again, it was an affirmation to us that we had the best people to guide us in the stove testing journey.

We were then shown the stove testing laboratory. It was startling how so much could go on in a small space that made it possible for standard stoves to be delivered to millions of users and consequently promote clean cooking. Before getting in the lab, one could never guess what was in it and what impact it had on the future of clean cooking. The experience not only challenged us professionally but also on a personal level, that space can never be an impediment in expanding and exploring scientific ideas and knowledge; it is more of how to utilize it fully to realize whatever idea we conceive in our minds.

We conducted a test, the Water Boiling Test (WBT), which is a laboratory based test intended to help stove manufacturers determine how efficient a stove is in terms of fuel usage; how well energy is transferred from the fuel to the cooking vessel. The test was conducted under the guidance of Mr. Derrick Kiwana, a renewable energy consultant. Reading about the test made it quite vague and several questions came up. Conducting the test made everything explicit and gave us the morale to regularly conduct such tests at SERC. Mr. Kiwana took us through other stove testing tests, including the Controlled Cooking Test (CCT), Kitchen Performance Test (KPT), and the Emissions and Performance Test Protocol (EPTP). The day concluded with a stroll around Makerere University and Wandegeya, which is around the university. Wandegeya is ever buzzing with activities mainly due to numerous students’ halls of residence, hotels, boutiques, grocery shops, and an easily recognizable bus terminus.

Friday, the final day of the benchmarking started out hot as the sun was up early and already hovering over the many hills of Kampala. The day’s topic of discussion was the ISO 17025, which was the heart of the establishment of a functioning stove testing laboratory. Mr. Alvin Araka, the quality assurance engineer made an illuminating presentation on the standard. Two main principles of a testing laboratory stood out; impartiality and confidentiality. It was clear that the two factors unequivocally determined the success of any laboratory. Other standard requirements and procedures were clearly outlined and exhaustively discussed.

The rest of the day mainly incorporated experiencing Kampala and the people’s culture, including learning a few words in Luganda, sampling a few of their cuisines and modes of transport. The many hills of Kampala were divine and made the city really beautiful to tour. These activities were made possible by the CREEC team and the people of Kampala at large; they were so doting and willing to share their culture and knowledge. The trip was a huge success as we not only learnt much on stove testing but also forged alliances and friendships that will last as we will continue exchanging ideas and resources to achieve a society that champions for and promotes clean cooking in whatever capacity it can.

This project is funded by GCF and is led by Ms. Teddy Nalubega.

You can contact us at serc@strathmore.edu for more information.